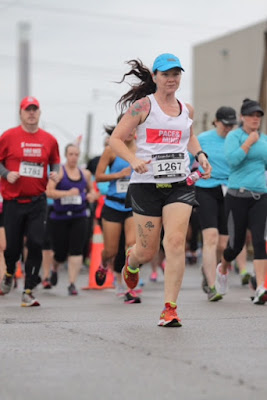 Welcome! <waves energetically>
This is my new blog which will serve as nothing more than a diary for me as I change out my running shoes for posing heels. Thanks for stopping by and I love feedback, so please let me know you were here, unless you are a weirdo or creeper. <grimace>

The saying, 'running gives back what you put in' is absolutely true. Over a 5 year period I ran countless hours and kilometres to distract myself from the relentless pull of addiction. Running was the only thing that spoke loudly enough to my soul to dull the noises in my head that said 'you need a drink'. I credit those voices that worked hard to lure me back and celebrate my failure, for making me a better runner. The harder they tried to get me to pour that first drink that would be the beginning of the end, the harder I ran. When I found myself particularly vulnerable to relapse, I focused even more on becoming a better runner. It seemed that the farther I ran the quieter the voices became and the faster I pushed the more control I had over their influence.

Today I celebrate six years sobriety. Six years without a drink. Six years of avoiding or leaving social situations where it seems everyone has a drink in their hand. The tendency to avoid being in the same room as a bottle of wine or case of beer was not necessarily because I felt weak to the alcohol but because the life I left behind was fun and a good and increasing buzz was part of that. I am a natural socializer. I like people and I most definitely liked them more when I was drunk, and at times I just plain missed the whole dynamic, the rituals and routines of going to a party. Six years...six years older...six years better and definitely six years wiser. I also truly believe that I am six years younger rather than older.

Over the past six years so many things have changed and continue to evolve to support my sobriety. I changed my job, my diet, my hair colour, and most recently my address. I had a therapist tell me that we spend the first five years of our sobriety finding out who we are and learning about ourselves. This seems true to me. As I reflect upon the past five years of running and the community of runners who supported me, (some who have become people I will always stay in touch with), I can see that I was definitely in the right place at the right time. I will always credit running and the community for my sobriety and for helping me to get to know my sober self. Through running, I found passion. The passion for the sport inspired me to become a goal setter and a goal achiever. 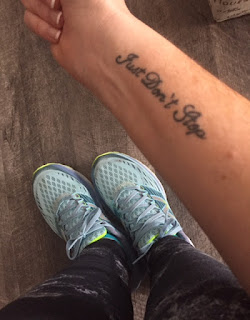 I have learned to persevere, to not give up, to keep moving, to keep looking forward, to make it to the next marker, to slow if I must but never give up, to control my thoughts, to do the work, to not complain, to be grateful for my physical ability, to compete with myself, to avoid comparisons. The things I have gained from being a committed runner, who at one point was coached by two different Canadian Men's Marathon Champions, are endless. I have learned so much from so many people and from myself. I learned that the will and strength to keep moving forward was already in me, it had just been doused in alcohol for most of my adult life and part of my teenage years. The words tattooed on my inner forearm weren't put there haphazardly. The words 'Just Don't Stop' are my version of Dory's 'Just keep swimming' and these 3 words have a deeper meaning to me than the ink they are set in. Running has reminded me that I will get there if I just don't stop.

This past year I took a break from training. A running injury in late 2015 gave me reason and time to defer goal setting in 2016. I spent time the first couple months of 2016 doing very little running and spending more time in the gym. It was my thinking, that when I was ready to set and pursue new running goals, I would do it from a place of physical strength, and truthfully my coach, physiotherapist and chiropractor had been encouraging this for years. I always intended to be committed to strength training but I just never made it fit into my running/work/family/life schedule. 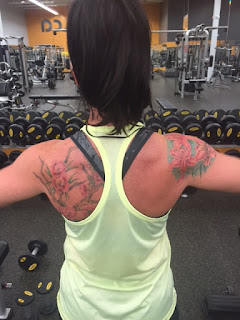 In April 2016, a shift happened. I don't know what changed or why it changed but all I wanted to do was be in the gym and grow. I ran less knowing that the kind of running I was used to doing would make it hard to gain real muscle mass and I was completely ok with scaling back on the road work. While I had never devoted the time I should have to strengthening my runners body, I was no stranger to the gym. When I was a kid, both my parents lifted heavy and my Mom competed in bodybuilding. As a teenager and young adult, I spent time in the gym lifting but my first love was drinking and as such I didn't really stick with anything I did. The new passion and fire burning in me to lift was not, historically speaking, an entirely new undertaking.

As 2016 progressed, I was in the gym 5-6 days per week and I saw changes. I loved what I saw and how strong I felt. Then something else happened. The competitive drive that I have always had started to fire up. I became curious and interested in what competing in the sport would look like for me. I watched hours of YouTube videos of women competing in bikini and figure divisions of bodybuilding shows. At first the feminist in me was mortified at the concept of putting on a rhinestone encrusted bikini, clear resin stripper heels, drag queen makeup, a fake tan and parading myself around a stage to be judged. I thought, I cannot do that, my beliefs wouldn't allow it...but I kept watching. I kept watching because leading up to judgement day for these women, were countless hours of preparation in the gym and the kitchen. I saw beyond show day to the commitment, dedication, hard work, and passion that the show was meant to highlight. The show, the judgment and the rhinestones were seeming less ridiculous to me as I saw it for the celebration it was. It was race day for the athletes, the tools to highlight their hard work were just different than the accessories a runner uses. It was when I saw beyond the obvious that I knew I wanted it. 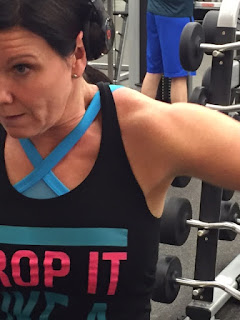 The goals for 2017 are on paper. I am a bikini competitor in the making. The gym is my playground, sugar is my enemy. I have coaches who have me covered with workout and diet plans. I also have the invaluable lessons I learned as a runner which are transferable to anything I decide to do. Running was a very special sport for a time in my life that I needed it but there are other things I can pursue with passion that will support my continued pursuit to be better than I was 6 years ago. I still run but nothing like the 15, 20, 30k or farther that I used to tackle. My footfalls on the pavement are much fewer and sweeter these days to make room for my new gym passion.

...and so, for this year at least, I am... Changing my Shoes.
Check back and watch me grow! 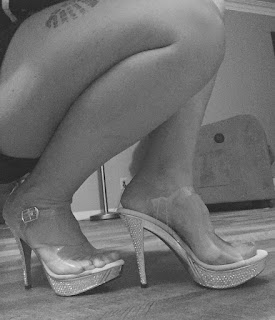 I invite you to take a moment and see where
alcohol recovery and running has taken me.
www.runninonempties.blogspot.ca
Posted by Unknown at 2:34 PM No comments: